Looking Back: Dragnet… Must Watch TV for LEOs!

I stumbled across an old episode of Dragnet the other day. ‘The Shooting Review Board’ first aired on September 21, 1967 and boy was it a beauty. It falls right in line with what interests many of you, and that is the subject of deadly force. Now there are TV shows and there are TV shows and then if you’re the police type there’s Dragnet. Stiff, straight to the point and rapid fire machine gun staccato lines delivered without emotion – quintessential Jack Webb.

Here’s the premise: Sgt. Joe Friday (Jack Webb) is involved in a shooting. It’s off-duty and is designed solely with the purpose in mind of enlightening the viewer of the seriousness and complexities inherent in an LAPD O.I.S. (officer invoiced shooting) circa 1967. That’s a mere 9 years before I joined the force by the way.

This episode is full of historical goodies. For one, you’ll see the combat pistol qualification range which still exists to this very day at the Elysian Park Academy facility. Think I have been joking about the one-handed crouched LAPD “Combat” stance all these years? Think again. There it is depicted in all its glory and it’s an actual combat qualification run to be sure. Those are real cops, real six inch guns and real clamshell holsters.

The stocks (which you can observe at the outset of the episode) on the pistol are Fuzzy Farrants which have become a rather collectible bit of LAPD lore. They didn’t fit my hand well so I opted for custom made John Hurst stocks which are on all of my LAPD pistols. These too have become quite the collector’s item. They were made from exotic woods and were hand- checkered with palm swells to really fit the hand well. Both of these gentlemen (who were real LAPD officers) have long since passed on to the great patrol field in the sky. If you didn’t have a pistol adorned with either of these stocks then you really weren’t a ‘dyed-in-the-wool’ gunfighter. If you didn’t have a six inch revolver then this theorem also held true. Right out of the Academy I acquired the Hurst stocks and then waited until I was in the Van Nuys Special Problems Unit until I carried a six inch stainless S&W revolver. 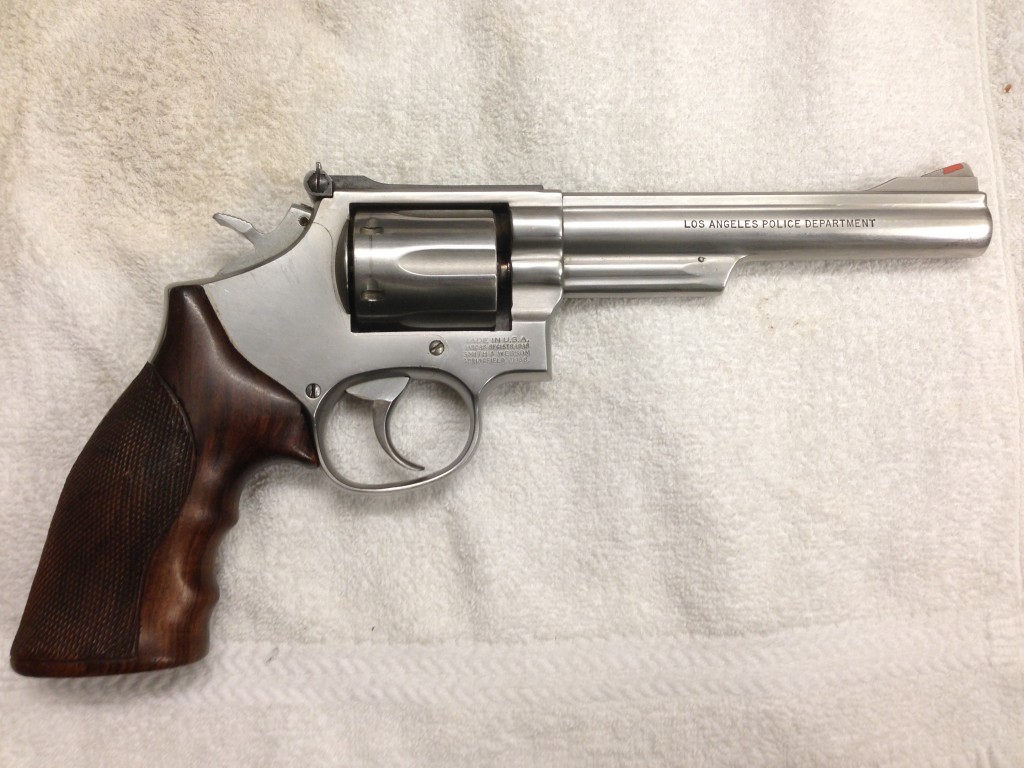 My LAPD 6 inch with Hurst stocks that i carried in the field.

So here’s the story line: Sgt. Joe Friday enters a Laundromat in the very early morning hours after having worked for 18 hours. He is off duty and alone. He is involved in a shooting wherein a miscreant who is attempting to break into a wall mounted vending machine is confronted by our hero.
“Police officer, freeze!”

The bad guy turns and shoots one round at Sgt. Friday who then draws from an antiquated leather holster (which used to be very prevalent on the department back in my time) and then returns fire. The bad guy throws a trash can at Friday while the bad guy’s girlfriend (a semi-hippie who I have no problem with) gets in the way and the bad guys make good their escape. Blood splatter is on the floor. Friday calls it in. There will be no SID persons to speak of. No crime scene tape. No light trucks, no evidence placards, no measurements, no command staff, no reporters, no Metro search teams, no photos, no K9 search teams…really, there’s nothing other than two field officers who respond to the shooting scene and just as quickly they depart!

The bad guy turns up dead, the girlfriend is beyond hysterical (real over-the-top acting) and arrives down at Parker Center. Sgt. Joe Friday hangs his head down while standing in the room as she yells at him and accuses him of murder. Sgt. Friday swears that the bad guy shot at him. Nobody knows what to think. The gun is recovered unloaded and with no apparent evidence that it had been fired. Sgt. Friday is in a lot of hot water.

A. Pierce Brooks (an LAPD officer who plays himself and was the co-author of “Street Survival” published in the 70’s) is in the episode and leads up the O.I.S. investigation. The shooting review board formally convenes and they peruse the reports in their entirety with Sgt. Friday and his partner Bill Gannon in attendance. Here’s where it gets really, really good.

When I work on cases they typically run into the thousands of pages. I mean that everything but the kitchen sink is included. I mean everything. This entire report on Sgt. Friday’s shooting beginning to end… is a whopping TWO PAGES! The investigators are commended on their thorough report by the Commander who heads up the shooting review board! Are you kidding me! Really? Thorough? Oh well, that’s the 60’s for you. I came, I saw, I shot… end of story.

Now eventually the bad guy’s bullet is recovered under a shelf which it had struck, and had then raised it slightly up during its transit into the wall and then fell back down into place which initially obscured the bullet strike. No doubt there have been such strange findings in shooting investigations. The ‘slug’ is eventually recovered and our beloved Sgt. Joe Friday is cleared. The Commander makes an impassioned speech about the LAPD badge and what it represents along with the severity of an LAPD officer discharging his gun in the line of duty. This speech alone is worth the price of admission.

I suggest that you settle back with a beer and watch the full episode in order to fully appreciate and absorb this entertainment. All of the facilities used are the real LAPD McCoy. No sets, no extras other than real honest-to-goodness LAPD cops from the 60’s! It’s pretty neat and is nothing short of historical pricelessness.

Here’s some Dragnet trivia for you:

• Only Dragnet and Adam 12 (Malloy and Reed) were ever allowed to use real LAPD badges the rest you will ever see on film are movie props. They were brought to set by personnel from media relations and returned after filming.

• Sgt. Friday’s Badge # 714 was derived from the fact that Jack Webb had an affinity for the number 7 hence 7 and then a multiple of 7 or 14. The LAPD Sergeant badge # 714 was officially retired never to be issued again.

• The hands wielding the sledgehammer and die at the end of the show are those of Jack Webb himself.

• The pistol given to Jack Webb by the department was for years, (and possibly still is) affixed inside the wall next to the PT office at the Elysian Park Academy. When you pounded on the door to be admitted as a recruit you were staring right at it. A bit of Psychology I would suppose.

• Martin Milner’s pistol used in Adam 12 was auctioned off for a minimum bid of $10,000.00 but never sold. It is fitted with Fuzzy Farrant stocks.

• These two shows Dragnet and Adam 12 put the LAPD on the map forever especially through the lens of Hollywood.

Those were good old days.

4 Responses to Looking Back: Dragnet… Must Watch TV for LEOs!