The Prevalence of Active Shootings – Don’t be a Victim

As I write this post another active shooter scenario is sadly unfolding at a high school in Washington State. So when students ask me which classes they should take and why, I’d have to say the Active Shooter course stands at the top of my list right now. I strongly recommend this class to anyone interested in learning what steps to take in the event of an active shooter scenario and how to recognize warning signs and telltale indicators before they happen.

On November 1 -2 ITTS will be conducting our last civilian active shooter class until later next year. After having taught this class to non law enforcement types over the past year, I realize that most people panic and are not effective in handling a quickly-evolving critical situation. It is not something we have been taught or have been exposed to in the past. Whether one is armed or not, the ability to respond correctly if caught within one of these scenarios is of paramount importance.

This class renders the student the ability to determine and counter the actions of an active shooter suspect and the signs leading up to a critical situation. We will have hands-on trauma care combat medical treatment both with and without trauma kits, hardening targets, immediate response as well as the psychological reaction to a traumatic incident and much more.

Day one will take place at the range with the morning segment taught by the LAPD instructor who conducts the critical combat care course to police departments across the country. This will be followed by a lecture from the head instructor in charge of tactics for the LAPD Academy, and then students will do live fire relays involving tactics, movement and medical care. 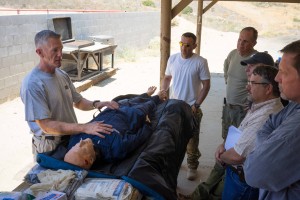 Day two will be conducted at an off-site facility with rooms set up to simulate a classroom, a restaurant, a living room, an office, hallways and other types of venues. The day will involve using Simunition provided by ITTS, with students role playing to rapidly evolving active shooter scenarios.

The class is well worth the time and effort for you, your family members and your co-workers. The practical, reality-driven knowledge you will gain increases your chance of survival and prevalence in such incidents.