Our recent Concealed Carry Class that we held in August was very successful and I really enjoyed teaching it. In 2013 our students began to express an increased interest in learning the proper techniques to carry concealed, as they began to catch wind that the local laws here in California may become more lenient towards issuing CCWs. This prompted us to design a class that addresses concealed carry, but not from an administrative process standpoint as so many others do (“here’s what you need to do to get your CCW”), but rather it would be about technique, how to blend in, mindset etc.

With a simple Google search one can easily find out everything they need to know about obtaining a CCW. What they can’t truly learn online (with any credibility anyways), is how to properly carry concealed and effectively deploy their firearm should the situation call for it. How does one compose themself when carrying concealed? What is the ideal handgun type, caliber, holster? How should one dress? There are so many gadgets and gizmos out there that claim to be the next best thing (in the class we’ve tested and eliminated quite a few of them), but what actually works? This is what our concealed carry class is about. We believe it transcends what is commonly taught and will most definitely debunk the nonsense that so called “experts” spew out on forums and such – but hopefully our students know by now not to believe everything…

they read online.
Students in attendance quickly realized that concealed carry entails much, much more than the simple carry and use of the firearm. As I have been carrying concealed for 38 plus years, I have learned a lesson or two about what the advantages and disadvantages are when carrying concealed. It would be great if the curriculum we teach was a requisite for anyone wishing to carry, because it’s a responsibility often taken all too lightly.

There are so many more subjects we covered that are essential to successfully and professionally carry a firearm in such a manner that I can’t begin to touch upon them all here. Suffice it to say that more than a few eyes were opened to the many subjects one might never have contemplated prior to attending the class. For those of you who assume (and 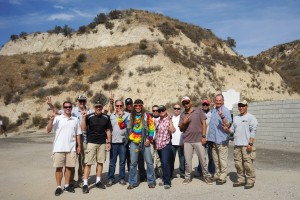 we are all guilty of this) that the physical appearance of an individual denotes who they truly are and what intentions may follow, allow me to remind you of the hippie in attendance who no one recognized as yours truly. That was the first lesson of the day.

The numerous cases I have personally worked on in court involving off-duty incidents and which I debriefed students on, are a reminder of the seriousness and rapidly evolving escalation of these events.

While some might view the ability to carry concealed as a right it is more of a privilege. With privilege comes an attendant responsibility to be both professional and competent. This is well worth considering.