Looking Back: The Los Angeles of Old

The three accompanying photos are from the book Los Angeles: Portrait of a City by Taschen. (If you live in the LA area it is well worth the price and it can be found on line.) There are lots of historical tidbits and very cool photos of a bygone era of Los Angeles. It is a really neat book. See if you can recognize many of the modern locations as compared to those of 60, 70 or more years ago. These three photos are priceless. They represent something that once was and no longer is. There is a certain naiveté and innocence in the pictures. Terrorism, mass shootings, rampant gang wars and such were still many years away.

The first is a frontal photo of LAPD Chief ‘Two Gun Davis.’ The accompanying statement refers to the picture and I quote; “In 1927, James “Two Gun” Davis inherited and perpetuated a department that was notoriously corrupt. 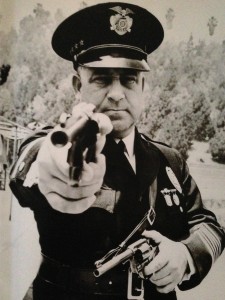 Adopting a tough-on-crime stance, he announced the he would “Hold court on gunmen in the Los Angeles streets; I want them brought in dead, not alive, and will reprimand any officer who shows the least mercy to a criminal.” Wow and holy smokes. Not exactly politically correct by today’s standards.

First and foremost are the 2 ubiquitous 6 inch revolvers. I believe these are Colts. I am not sure of the caliber but they might be .38’s. I am not sure where he would have carried the second gun when in uniform. He has two shooting medals which I have never seen. The LAPD badge is a very old school style and does not at all resemble the LAPD badge of today. Then there are the four stars on the hat itself on the right side. I’ve never seen that either. The shoulder strap of the Sam Browne duty belt is most definitely old school. When I came on the LAPD one or two older officers had a Sam Browne with double silver ‘D’ rings on the belt itself. This was so the belt with the shoulder strap could be worn either right or left handed. If you had a double ‘D’ ring Sam Browne then you were most assuredly ‘Old School’ no doubt about it. The shoulder strap (Which bore part of the weight of the duty rig) was done away with (so the story goes) as it too closely resembled the Nazi uniforms of WWII. While “Two Gun’ Davis’s belt does not depict the double ‘D’ rings, I assure you that they were prevalent back then. Perhaps he cut his off.

I love the fingers on the triggers. I don’t think he would have given a damn if someone pointed this out today. He’d probably shoot you right then and there for insubordination and be done with it. Given the nature of firearms safety of that era I’m surprised that there aren’t bullets protruding from the fronts of the cylinders. I’m surprised he didn’t shoot the photographer for not getting his good side as well.

There is another photo of a group of LAPD members (circa 1935) known as the “Gun Squad” and Chief Davis is on the far left to the back. These boys seem like they meant business. They’d most likely mow you down just for coming from out of town or for having no gloves in the glove box. Fortunately the rampant corruption so prevalent back then was cleaned up by Chief Parker many years later. 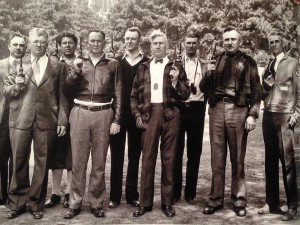 The third photo is the ‘Hard Rock’ Café. Now for a bit of real trivial history! This photo depicts none other than the music group ‘The Doors’ of Jim Morrison Fame. Apparently this photo was on one of their albums but I’m not sure which one that was. The fronts-piece that states “The original Hard Rock Café, at 300 East Fifth Street, was the backdrop for a Doors photo shoot, 1969.” This location is on the Southeast corner of 5th and Wall right smack dab across from (you guessed it) Metropolitan Division housed in the Central Facilities complex. It is dead center in the heart of Skid Row. This photo depicts the Hard Rock in a rather clean state of repair. Allow me to set the record straight. I’ve been inside this location a number of times and driven by it many hundreds of times as it was directly across from the entrance to Metro. Now this was THE REAL ‘Hard Rock.’ This was decidedly NOT the fru-frau drinking, faux memorabilia encased, wanna-be kiddie rock star Hard Rock of Vegas fame. Not by a long shot. 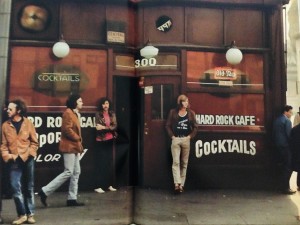 This place could kill you just by walking in! First it was absolutely filthy when I knew it. I don’t mean just a little dusty but the oily, greasy, blackened, decades layered filth, dirt stained plastered-on-filth where even the cockroaches contracted rare, unknown diseases. It was not uncommon to observe bodies passed out right on the doorstep or, laid up right up next to the walls. I mean you’d have to step over the bodies just to walk in. More than once you’d drive into Metro and there’d be crime scene tape taped outside the front door as RHD investigated a murder inside. There were those who were passed out, beaten, stabbed or shot or just plain fed up with life who littered the outside of the ‘Hard Rock’ at all hours of the day and night. There were prostitutes, drug dealers, thieves, con-men, arsonists, burglars, stick-up men, child molesters, pick pockets, murderers, parolees, politicians and every manner of nefarious patrons who graced this fine, upstanding establishment. It made the Star Wars bar scene look like a Girl Scout picnic!

On the rare occasions when we did have to go into the location, it took about two hours for your eyes to adjust to the darkness. It was that dark and dingy. The smell inside was a combination of sweat, stale alcohol, dirty feet and really old urine. You could inhale and be right under the influence from the cheap alcohol fumes that permeated the stale air. The LA smog outside was 1000 times fresher. Your feet literally stuck to the floor – your uniform shoes would make a sucking sound when you walked. I doubt there was a single full set of teeth between all the patrons inside. Even the women there scared me. They looked as if they’d open you up with a straight edge razor if you didn’t buy them a drink. It was rough! Now THAT was the REAL “Hard Rock Café!”
It is long gone now. I wish someone would have absconded with the sign or the lettered window and put it on the wall at Metro. I wish I had photos of the establishment when I knew it. They’re probably out there but just who has them is a mystery at this point in time.

3 Responses to Looking Back: The Los Angeles of Old