Looking Back: Cross Training with Tier One Units

Cross Training: LAPD SWAT still conducts cross training to this day with various military special operations units. Initially, from my understanding, the US Marines gave training to the very first LA SWAT members. A group of us would return the favor many years later when we trained the Special Operations Capable Marine Amphibious Unit Force Recon in hostage rescue down at Camp Pendleton Calif. While there is a distinction between a war footing and police work (A rather great one I might add), there are some similarities.

We worked extensively with SEAL Team 6 which included members of Red Cell. We also worked with US Army Delta as well as the FBI Hostage Rescue Team. Two of us, Greg Horton and I went back to Fort Campbell Kentucky for three weeks to cross train in the field with ST 6. We also worked with TF 160 known as the Nightstalkers who were the pilots for such specialized operations.

The three weeks in the field were nothing short of eye watering. We were allowed to call in the Spector gunship on gun runs, fly the Hughes 500 little birds while firing the mini-gun and 2.75 inch Zuni rockets, fire off AT4 anti-armor rockets… 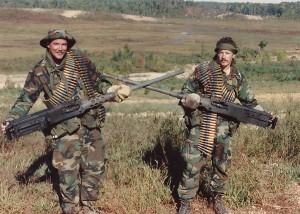 and the LAWS rockets, set claymores, throw hand grenades until our arms were sore, and shoot the Browning 50 caliber until the barrels warped. To say that all of this was enlightening is an understatement. We conducted field operations day and night, escape and evasion exercises from Blackhawk helicopters and flew nap-of-the-earth high speed runs from Chinooks. We set ambushes and assaults all live fire with really, really close air support firing right over us as hot brass rained down. It was an ‘E’ coupon ride to say the least.
The guys of ST6 were a lot of fun and generous as well. At the end of it all there was quite a bit of unexpended ordnance. “Hey… you guys want to take this stuff back to LA?” Being the dutiful Officers we were, Greg and I dropped a dime back to our SWAT Lieutenant. “Hey boss the SEAL’s have some stuff for us to bring back to LA… do you want it?” “Well, what is it?” he asked. “Well we’ve got AT4’s and LAWS rockets, claymores, grenades, detonation cord and tons of 50 caliber rounds.” He replied “Have you guys lost your minds?” Needless to say Both Greg and I returned via commercial air sans ordnance. Don’t know what we would’ve done with it anyway, but at least we had asked.

If nothing else it gave both Greg and I a real appreciation of the capabilities of top level performers. Now you can’t do such things in Los Angeles, not really. The use of anti-tank rockets to quell gangland drive by shootings is discouraged by the department. Claymores are also discouraged against rock cocaine houses. Hand grenades can only be used sparingly. Mini-guns can only be employed on Friday nights and then, only during the summer months. The Spector gunship can only be called in when things are boring and pedestrians are crossing against red lights. Other than that all else is fair game.
The unique factor with cross training is an appreciation for the obstacles which we and whomever we train with are faced with. While we deal with specific laws and departmental protocols, they deal with geographical obstacles and international impediments. Where we might face several bad guys they might face even more. If they operate in a non-permissive arena then things can become dicey as most of you are aware. The weapons employed are unique to each respective profession and yet the overall mindset is very similar.

I am not personally aware of any domestic police unit that cross trains with tier one units as much as LAPD SWAT. They have come on ‘rock house’ warrants we served to observe command and control and how we dealt with close quarter environments, sentry neutralization, shoot/no-shoot real world decisions, stealth approach and pre-planning within real world settings. I would imagine that they have put much of this to use on a much larger and more dynamic scale than we had.

Cross training with such units is a once in a lifetime opportunity and I am grateful for having had the chance to do what I did. It was most impressive.

One Response to Looking Back: Cross Training with Tier One Units