Looking Back: Frank Mika, One of a Kind – By Scott Reitz 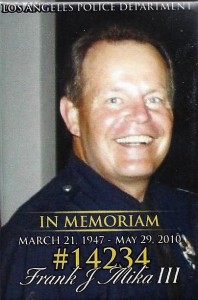 Every now and then you come across and individual who stands out in your memory.  Frank Mika was such a person.  He was not only my partner in SWAT but he was the first honest to goodness street cop I had ever experienced the streets with.

Back in 1976, the LAPD Academy allowed you to go on one ride-along in the streets towards the latter part of Academy training.  I got Wilshire Division where I would ultimately conduct my probationary training.  I also got Frank Mika.  Now my classmates went on some “ride-alongs” but no one experienced what I did on that first night on the streets of Los Angeles.

Frank must have decided to take recruiting to a whole new level.  He took me on every “hot-shot” call, every ambulance shooting, stabbing and violent domestic disturbance he could buy or “roll on”.  If there was pursuit or crime scene Frank managed to get us there.  How he did it I do not know but he did.  From the time we hit the streets to the end of watch some 10 or 11 hours later it was non-stop, full throttle action.  I could not sleep for days.  Other classmates really got a handle on tickets, community relations and getting cats down out of trees while Frank decided to give the kid (me) a real experience.  If nothing else cemented my desire to go full time LAPD it was that night.

We had a lot of fun together.  It was Bob Guzman, Frank and I on the car.  That the three of us did not burn down the city when we worked together was nothing short of a miracle.  We rolled on more hot calls, put away more bad guys and got involved in more capers than I can remember.  Frank came up with the police car polygraph concept.  He had bad guys put their hand over the police car’s light while he held the police mike in his hand behind his back.  He set the microphone to the public address system which sounded very much like a human heartbeat on full volume when you ‘keyed’ the microphone switch.  He’d then ask the suspect a question and began to key the mike rapidly behind his back when the suspect lied.  The suspect figured this polygraph thing really worked and he was hearing his own heartbeat so he started telling us the truth after a time.  It was absolutely hilarious.  It was also quintessential Frank Mika.

Frank had a seriously twisted sense of humor.  When you drove he would suddenly shout “Watch out!” when you crossed an intersection.  You really don’t have time to question such a thing from your partner when you’re driving so you’d slam on the brakes and swerve not knowing what was coming or where it was coming from.  Well….guess what?  There wasn’t anything coming and Frank would state “Made you look.” while your heart rate settled back down.  He would do this randomly so you never knew when it was coming nor if in fact, it was for real or not.  I got him back once however when we were driving into roll call at 114 on the Ventura Freeway.  It was stop and go traffic (Southern California after all) and I could see the guy driving behind us looking down just prior to rear ending us.  I shouted “Look out!”  Frank was reading the newspaper and he slowly turned toward me and began to say “Fuuuc…” when we were hit.  Franks face went back and then forward into the dashboard.  I swear the right side of his face had newsprint on it when he came up.  I was laughing so hard it hurt.  “Made you look mother#$@%^!!!”  Payback.

On another note he could seriously mess with you.  When he was in charge of the firearms/tactics training as a Sergeant II at the LAPD Academy he had a lot of credibility. At the time I was providing advanced firearms/tactics training out at the range to Divisions through Metro Division.  Apparently, at some point some young, blonde female officer approached Frank and queried him about my status of availability after she had been through our training on the range.  With a serious face Frank responded “Didn’t you know?  He’s gay.  We all know that but because we respect him no one really says anything.”  Now word on the department spreads like wild fire.  Think of it as a rather large women’s knitting circle with guns.  For about 6 months I could not figure out why officers responded to me differently than they had before when I trained them.  When I found out about this I saw Frank at the Academy.  Emblematic of Frank was his all too familiar response “Got you mother$@&$#%!!!”  Yes he did.

Frank would call anyone out on BS and he was a straight shooter if ever there was one.  He was a great partner and backed you to the wall.   He succumbed to brain cancer some time ago and I miss him a lot.  He was always there for you no matter what and was a great joy to be around.  There was only one Frank Mika and there won’t be another.  Thanks Frank… for everything!

This entry was posted in Articles Written by Scott Reitz, Favorites, News. Bookmark the permalink.

17 Responses to Looking Back: Frank Mika, One of a Kind – By Scott Reitz