Looking Back: Proud Times in the LAPD Academy – By Scott Reitz

Young Officers often find it amusing when I tell them of the LAPD Academy back many years ago when I came on the department and what was expected of you. So with this thought in mind I thought I’d take you down memory lane to November 22, 1976. Today the LAPD and many departments have a hard time finding recruits to fill their ranks, but back in 1976 this was not the case… not by a long shot!

Thousands of applicants had applied for positions on the Department that year and from these numbers, only 2500 were actively processed. From this applicant pool they took less than a hundred of us. Since you didn’t want to screw this up after all the hand wringing and pressure, you did everything by the numbers. The roll call was at 0500 hours at the Academy grounds in the gymnasium in a suit and tie and sporting a very, very short haircut. Almost all of us were there in the parking lot at 0300 staring at one another from inside our personal vehicles.

Terry Spears, George Haines and Jerry Stokes were our primary instructors and the very first thing that they made emphatically clear was that we did not deserve to be LAPD Officers unless we earned it. Talk about pressure? We soon found out that if they told you to get, “your hat and books” that meant that you were finished right then and there. This could come at you from out of the blue for any number of reasons and back then a recruit suing a department for such dismissal was unheard of so there was no recourse available if you slipped up.

“Stand clear,” was shouted to our class anytime a sworn Officer approached anywhere on the Academy grounds. This meant that you cleared a path and slammed your body against the wall if at all possible until that Officer had passed the class in its entirety. This made for lengthy transits through the Academy grounds from one location to the next with no reprieve for being late to a scheduled activity.

We wore khaki uniforms that were pressed and starched and the Sam Browne’s and leather gear were spit shined at all times. We were issued Smith and Wesson four-inch stainless steel .38 caliber revolvers with two dump pouches for a whopping twelve spare rounds. At the time the only authorized ammunition was the138 grain lead round nosed bullet. This thing wouldn’t bowl a bunny rabbit over at ten feet but that was all that we had! We had a straight hickory wood baton, one set of Peerless handcuffs, a badge, a whistle, a yellow plastic flashlight and we were to be set on the streets to bring the nefarious denizens of the city to bay with all of this high tech, official police gear.

You had to wear your hat at all times. Even if you were shot to doll rags you’d better have that hat on or you’d take days without pay or worse. I could see it now, “Shot to smithereens? Where’s his hat… that’s what I want to know?”

You didn’t dare show up late to the Academy or that definitely was your last day as we were constantly reminded of all the other applicants just waiting to take our place.

You had to be very careful in asking a question of an instructor. It you needed clarification on an issue then they wondered just how stupid you really were. If you didn’t ask for clarification then they wondered just how stupid you really were. It was great fun! The one thing they did however was to instill a real sense of pride in what it took to be an LA cop armed with the key to the city, which of course was the world famous LAPD badge. (It was rounded they told us, so that the department could insert it into parts unknown if we really ‘stepped on it’ during the course of our career.)

They regaled us with historical gunfights and pursuits and legendary capers of those that had served before us and it really made you proud just to be a raw recruit in such a department. Physical training was fairly intensive and the instructors pushed you all they way. Back then you choked each other out, kicked each other and generally tried to kill one of your classmates much to the amusement of the instructors. George Haines was a bear of a man and an Olympic Judo champion and, as I found out later, a man with a great heart who would set us against one another on the combat mats and then yell, “Combat Wrassle…” from then on it was an all out fight until one of the recruits was rendered into a shapeless lump of nothing. This was an early version of Ultimate Fighting but without the scorecard girls! 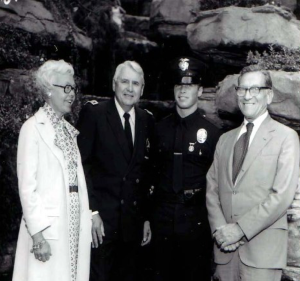