“The Mad Woman of Cimarroncita”

Not everything ‘Uncle Scotty’ has done in the past has anything to do with either police work, tactics, deadly force or other activities along such lines. The following is a case in point. The year, if I’m not mistaken, was 1974. It was the summer break from my sophomore year the University of New Mexico. Somehow and in some way (much to their chagrin) after many others at UNM were interviewed, I was chosen as a camp counselor for a very exclusive boys and girls camp way up in the northern area of Cimarron, New Mexico. The accompanying photo depicts my charges in the cabin known as ‘Coyote Cabin.’ Most of the young men were between the ages of 11 – 13. 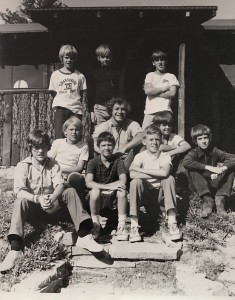 Camp Cimarroncita was absolutely beautiful beyond belief. Nestled high in the mountains of Cimarron, New Mexico, it afforded stunning mountain views crisp, clean air (everyday, rain showers rolled in, cleansed the air and rolled right back out) and tons of activities. Believe it or not, I was designated the camp rifle instructor teaching all the young men in the camp about firearms safety and marksmanship on .22 long rifles at 50 feet. In addition, I took the boys on hikes, riding activities, tennis, and archery as well as anything else that the supervisory staff deemed fit for us.

On one particular hike, I elected to hike them up a rather challenging peak in the surrounding mountains. Having summited the peak, I broke out oranges for all to enjoy. Everyone with the exception of one individual ripped off the orange skins and promptly devoured them on the spot. One however did not. I asked him, “What’s the matter?” His response, “I don’t know how to peel an orange.” Now even back then in my supple, tender years I was not surprised at much, however, this really threw me for a loop. “Well who does peel oranges for you?” “My butler!” Okay… “What are you going to do when you’re older and you don’t have a butler?” “I already have ten million dollars in my bank account.” “Here, let me peel the orange for you, ” I said. Remember these are 1974 dollars. These were young men from some very well to do families, to say the least.

On that mountain trip I inadvertently (always pay attention to detail) sat down on a prickly pear cactus promptly resulting in the boys bequeathing me the sobriquet of ‘Cactus Ass.’ I was also somewhat in shape and they added on the additional insult of ‘Cotton Muscles – Cactus Ass.’ God bless their little hearts.

Now at bedtime my young charges wanted scary stories. This is an era preceding the advent of the internet, cell phones, iPads, etc. Nope, back then you actually had to be creative and boy was I ever about to get creative! “You want a scary story… I mean reeeealllly, reeealllly scary?” “Yes, yes, yes!” Okay boys, here it goes and remember, you’re all sworn to secrecy so raise your little right hands…”

“During World War II, closely connected to the atomic bombs Manhattan Project, there was a scientist along with his wife, developing a top secret, government serum for use by our soldiers overseas in Los Alamos New Mexico. One night, not too far from here on that road right below our very own camp, the scientist and his wife were driving in a blustering, dark driven rain when their car plunged off the road. The top secret vials of serum broke open and dripped the gooey blue, bitter tasting serum into the scientist’s wife’s open mouth. The scientist died, but she did not. She slowly struggled out of the car and made her way deep down into the canyon to drink from the river we crossed just the other day. Remember that? With each drink of water, her form began to alter and she felt dizzy as her front teeth began to grow out into sharp, long, hollow needles. Her fingernails also became long and hollow and even sharper and she suddenly developed an insatiable appetite for the blood of young boys. You guys want me to go on?” “Yes, yes!” “OOOOOkay….” (To understand the full terror these boys would endure, one must understand that the bathrooms for all the cabins at Cimarroncita were about 75 – 100 yards away in a pathway through the woods in total, and I mean absolute total, darkness). “The mad woman of Cimarroncita, thirsting for blood, could smell the young boys far up the hill in the camp. You see, her ears became as acute as a deer’s and she could smell things just like a she wolf and she was just as fast. She worked her way up the mountain and waited, hidden deep in the dark trees late at night, for when the young boys went to the bathroom. Without a sound, she pounced on them and drained their little bodies of blood with her hollow teeth and hollow nails and carried away their little limp, lifeless forms deep into the mountains. Never again were these boys ever heard from or seen again. She did this night after night relentlessly pursuing, her unquenchable thirst for young boys blood! Why just last year, only half of the boys who came here ever made it out!” You could have heard a pin drop.

From somewhere in the darkened cabin a trembling voice questioned, “Scott?” “Yeeesss….” “Did they ever catch her?” “No, they never did as the serum also made her faster than a deer and more cunning than any wolf that ever lived. Remember?” “What did you tell their parents?” “That we’re very sorry, but your son didn’t make it… now go to sleep!” Now there is Karma and there is Karma. There is also payback. The next morning if I am not mistaken, just about every bed sheet had to be changed by, you guessed it, me.”

Following that night the woman in charge of the camp, (Madam Scully if memory serves me well) heard of the story, called me in and promptly dressed me down for regaling the boys in stories not necessarily designed to ensure repeat customers the following summer camp year. And that, my friends, is the true story of the Mad Woman of Cimarroncita.

4 Responses to “The Mad Woman of Cimarroncita”