Many of you may have doubted about the existence of the proverbial ‘Ball Bearing With Lips’ I have oftentimes referred to. A bit of history is called for here. Many years ago while training the USMC Force Recon Platoons down at Camp Pendleton while in SWAT, I overheard a Master Gunnery Sergeant issue the following statement relative to one of his charges, “You could give that Marine two steel ball bearings…place him into an empty Connex box…and…within five minutes…he’d lose one of them and break the other!” In other words…a blithering dolt.

Many of you may have doubted the existence of the proverbial ‘Ball Bearing With Lips’ I have oftentimes referred to. A bit of history is called for here. Years ago when I was in SWAT, while training the USMC Force Recon Platoons down at Camp Pendleton, I overheard a Master Gunnery Sergeant issue the following statement relative to one of his charges,

“You could give that Marine two steel ball bearings… place him into an empty Connex box… and within five minutes he’d lose one of them and break the other!”

In other words he was a blithering dolt.

All of us have dealt with those who ‘just don’t seem to get it.’ No manner of instruction, cajoling, nurturing, patience, understanding, example, testing, affirmation, re-affirmation, praise, trophy issuance, accolades, testimonials, softness, persuasion, guidance, exemplars, blocked instruction, rudimentary instruction, base-line instruction, Neolithic pictorial cave exemplars or pre-school Crayola diagrams will ever… ever… ever… get through to them. They just don’t get it!

(Note: Any individual who fits into this category irrespective of the endeavor in which either he or she is involved, has earned and has matriculated to the distinguishable level is accorded the subsequent title of the analogy to be revealed. Such an award may be presented either formally or informally attendant with all the pomp and circumstance one deems appropriate for the occasion.)

A new and entirely different stratum of category is called for when such individuals are encountered. Analogies and most especially those analogies that are succinct and brevet in nature are those that stick with us and yet, within their brief existence, conjure up clear and distinct evocations of all of that which is being described.

About twenty years ago while instructing a young group of ‘New Guys’ there were a couple candidates that left me scratching my head. Sometimes, you simply just wonder. Sometimes you really, really wonder and sometimes, you wonder why you’re even bothering about wondering in the first place. When one stumbles across such individuals, it begs for an accurate descriptor of just precisely what it is you are dealing with!

I don’t know where it came from, but from deep within the inner recesses of my subconscious brain, in concert with the Marine Gunnery Sergeant’s comments so many years before, suddenly the words spilled forth from me in an unconscious stream of consciousness… “Ball bearing with lips!!!!!! ™” (I liked it so much that I trademarked it!)

I had said it. It was intractable. It was there for all eternity and to remain in perpetuity. It was forever etched in granite and carved in stone.

Now many of you have heard me over the course of time, utter the phrase “A Ball Bearing With Lips ™” and we have the discussed the issue at great length over the decades. However, upon reflection none of us has ever actually observed an actual “Ball Bearing With Lips ™”… not really. We know individuals who closely resemble one, but are obviously not one physically.

A student of ours and acquaintance of many of you, Steve Kahan, who is also an LASD Deputy Reserve, acquired a 3 inch stainless steel ball bearing and had an artist hand-paint the most perfect lips (aside from Brett’s) on the surface. He presented this to us in December of 2015 as a holiday gift. It was a very thoughtful gesture and much appreciated!

So here it is! THE FIRST EVER… IN THE ENTIRE HISTORY OF MANKIND… THE PROVERBIAL and ACTUAL “BALL BEARING WITH LIPS™!!!!!” 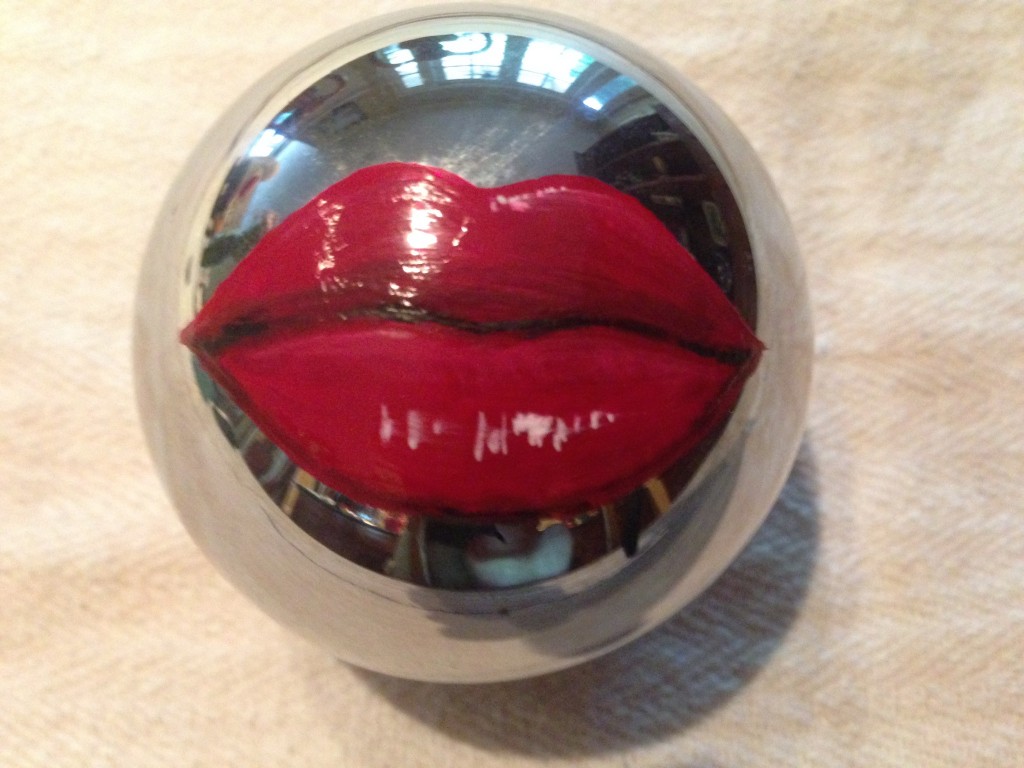